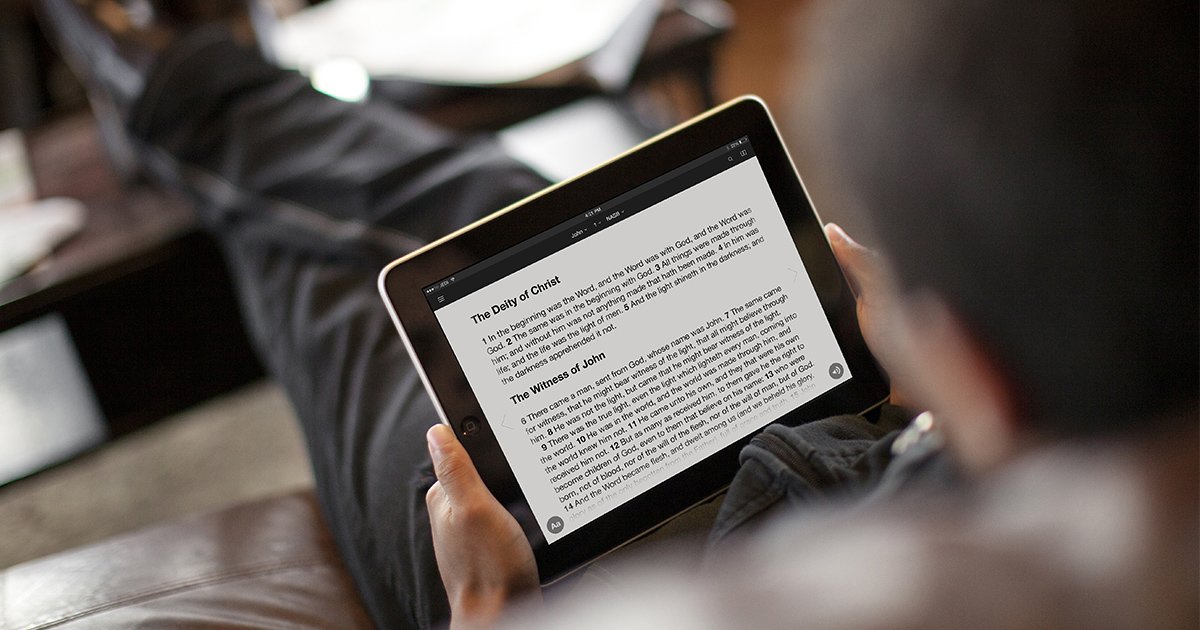 Men are more likely than women to finish Bible reading plans on an app, but they don’t glean as much as when using a good, old-fashioned paper book, according a recent study in the Journal of Religion, Media, and Digital Culture.

Women retained about the same amount of information and completed a similar amount of reading on either medium, though men finished more daily readings than women. Those who used the app completed, on average, almost two more days of reading than print users.

John Dyer, a Christian coder conducting his PhD research on the Bible software industry, didn’t expect differences between male and female readers to turn up in his data, which is now the first to compare print and screen reading comprehension by gender.

By most social science measures, women are more religious than men. The recent American Bible Society survey relates that more women report desire to engage with the Bible compared to men. Another has shown that men and women view the Bible differently and once this is accounted for they tend to report the same feeling of being close with God.

Dyer’s findings echo broader social patterns: Boys tend to prefer digital formats more than girls, and female readers consistently score better in comprehension. Plus, working men also work more than working women, according to US Bureau of Labor Statistics, indicating that it may be easier to turn to digital reading in this setting.

However, Dyer’s research actually doesn’t narrowly focus on gender but seeks to understand the differences and habits between Bible reading in print versus digitally. For the study, Dyer enlisted participants from two non-denominational megachurches and one Southern Baptist church in the Dallas area. He asked participants to read the book of Jude in print or digitally and answer some questions. Then he asked them to participate in a 10-day reading plan of the book of John using same the medium as they did in the church class.

Dyer conducted an assessment of their comprehension and asked how they felt after reading. The three most common answers were “encouraged,” “discouraged,” and “confused.”

“Digital users were nearly twice as likely to report feeling ‘confused’ with many indicating that they would like to ‘read it again’ or ‘study Jude more,’” he reported.

For the reading plan, those reading digital Bibles set up YouVersion accounts and enabled reminders set for a specific time of day. Participants answered survey questions at the end of the plan.

Sociologist Timothy Hutchings argues that the reading reminders in Bible apps are a form of “persuasive computing,” supporting the daily reading habits that tend to be valued by evangelicals. Last year—thanks to the automated reminders, tracked progress, and easy access to passages—users completed 950 million days of Bible-reading plans on the YouVersion app.

But participants who completed Dyer’s reading plans were more negative about the technology than they were initially during the church assessment. “When they actually use technology and reflect on it privately, they are more willing to acknowledge ways their devices may be negatively affecting their spiritual goals,” he wrote.

One female respondent wrote, “When reading on the phone I feel like I was less engaged than when reading a paper Bible. It felt a little more like skimming an email to get it done rather than really studying God’s word. I do like the electronic reminder.”

Dyer also gathered data on participant’s current Bible reading habits, asking them to check a box for which media they prefer to use for different forms of Bible engagement. Two-thirds of respondents preferred print for long reading (66%) and for study (65%).

On smartphones, respondents said they use apps for devotionals (45.3%) or Bible searches (38.7%). Smartphones were also the highest medium for audio. Tablet users often also used their print Bibles and phone apps as well.

Dyer noted a pragmatism to Bible reading for most participants. For example, many don’t bring a print Bible to work or school, but when they read in those settings 42.7 percent use their smartphone, 20.7 percent use their computer. While in church, many felt more comfortable opening their print Bibles rather than an app. When reading to children, people preferred reading the print Bible (42.7%) instead of engaging the Bible using a smartphone (12.7%), likely “because they wanted to foster a healthy respect for the Bible,” said Dyer.

“Print and digital Bibles are usually framed in opposition to one another… but the data suggests the relationship is much more complex,” he said. “Bible reading today is more of a multimedia experience, with readers using a combination of print, screen, and audio depending on form of Bible engagement they are doing.”

That said, his observations reveal that “(people) make these choices often based on convenience—often grabbing the Nearest Available Bible (NAB)—and are unaware of the effect the medium has on the message and the reader.”

But one of Dyer’s biggest takeaways is how men and women differ in Bible reading preferences and comprehension, suggesting that digital Bible apps engage men more but may not provide deeper understanding.