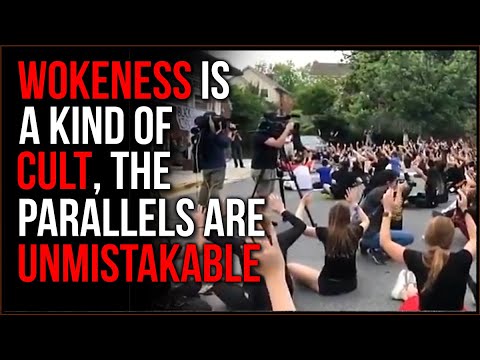 By NEIL SHENVI AND PAT SAWYER, Syndicated from The American Conservative

The ideology of Critical Social Justice is best challenged not by secular liberalism but by the hope preached by Christianity for thousands of years.

The last few years have witnessed a great revival in the United States, as people have gathered to hear a message of sin and repentance proclaimed by spiritual leaders like Robin DiAngelo and Ibram X.Kendi. While the antiracist, antisexist, anti-oppressive message of the Great Awokening is allegedly secular rather than religious, its promises of equity, diversity, absolution, and inclusion have captured the imaginations and allegiances of everyone from scholars, to H.R. administrators, to entertainers, to mainstream journalists.

As many cultural commentators have suggested, we are witnessing the emergence of a new, secular religion, which views all reality through the lens of oppression, power dynamics, and social justice. But many people are also noticing a dark side. Last summer, the Smithsonian Institute released an infographic describing “rational, linear thinking” and “cause-and-effect relationships” as attributes of “whiteness.” Public school trainings accuse educators of the “spirit murdering of black and brown children,” and the Brighton and Sussex University Hospitals announced a “gender-inclusive language” policy that replaced the word “breastfeeding” with “chestfeeding.”

Worried by these developments, we join with classical liberals, moderates, and conservatives to oppose the growing illiberalism we’re seeing in our culture. But while secular liberalism is in many respects a procedural set of principles (with an assumption of moral authority) for settling disputes through open dialogue and the rule of law, the ideology of the moment is a grand metanarrative about reality. Trying to oppose an epic metanarrative by appealing to abstract principles may be a fool’s errand. As Christians, we believe this ideology is best challenged not by the secularism from which it emerged, but by an older vision—the one preached by Christianity for thousands of years.

To understand why, we need to explain the origins of this ideology and some of its core ideas. Critical Social Justice (CSJ), or “wokeness” at the popular level, emerged from a number of critical social theories including critical race theory, feminist theory, critical pedagogy, postcolonial theory, and queer theory, among others. While CSJ is in many ways a truncated amalgamation of the large, complex, and multifaceted knowledge area of critical social theory, it nevertheless takes its cues from it. Like their Marxist and then Neo-Marxist predecessors of historic critical theory and the Frankfurt School, critical social theorists seek to disrupt oppressive ideologies they believe justify inequitable distributions of wealth, resources, and cultural power. Contemporary critical theorists have also been notably influenced by the postmodernism and poststructuralism of scholars such as Michel Foucault, Jacques Derrida, and Francois Lyotard.

The borrowing from numerous intellectual traditions has created a strange elixir of postmodernist and modernist perspectives in this new intellectual milieu. On one hand, it incorporates the skepticism and cynicism of postmodernism towards overarching metanarratives and universal truth. Critical social justice insists that appeals to “objective” knowledge are often ways in which those with power justify their dominance. Civil rights discourse, meritocracy, sex differences, and even mathematics can be problematized as arbitrary, oppressive constructions of the ruling class.

On the other hand, CSJ is deeply modernist in that it makes universal moral demands. Racism, sexism, classicism, adultism, heteronormativity, cisgenderism, fatphobia, etc. are all viewed as objectively evil. In addition, because woke ideology is downstream from standpoint theory, the woke are not thoroughgoing relativists with respect to truth. While “oppressors” have unique cultural blindness, those who are “oppressed” are objectively better able to “read the world” (a la Paulo Freire) due to their “lived experience” derived from their social location.

With that introduction and context, how does Christianity offer resources for challenging “wokeness”?

First, Christianity insists that we live in an irreducibly moral universe. Consequently, Christians don’t attempt to challenge this new consensus by urging people to be less moral or less concerned about those on the margins. Trying to understand human behavior apart from an understanding of our moral nature is like trying to understand how the solar system works apart from an understanding of gravity. Critical social justice thinking strikes such a pronounced chord with us because it speaks in terms loaded with moral freight. Terms such as “justice,” “oppression,” “white supremacy,” “racism”, “misogyny,” “equity,” “bigotry,” “complicity,” and “privilege,” among others.

Christianity paints a different (and fuller) picture of human need and human flourishing than the one of critical social justice, one that sees sin, not oppression, as our fundamental problem and spiritual redemption, not political liberation, as the ultimate solution. Our moral yearnings are not the mere product of evolution; they are the result of being created in the image of God. A God who is the father of the fatherless and the defender and friend of widows and orphans (Psalm 68:5, James 1:27).

Second, Christianity knows that we’re all seeking moral justification, whether we explain it with religious or non-religious language. In other words, all of us are seeking to be considered “righteous,” “good,” and “worthy.” While many accusations of performative “virtue signaling” are, no doubt, accurate, some people actually believe what they are saying. When they loudly lament their whiteness, abase themselves for the smallest infractions (microaggressions), and promise to “do better,” they are motivated by the same drive that led Medieval peasants to wear hair shirts, kiss cathedral steps, and buy indulgences.

Christianity doesn’t scoff at this impulse, but redirects it. Our deep, human urge to be justified, to be declared righteous, can ultimately only be met by God’s forgiveness. It won’t be achieved through a never-ending cycle of grievance and absolution.

Third, Christianity offers radical grace where critical social justice offers us the tempting poison of self-righteousness. While the inner ring of allyship comes at a cost, it is infinitely preferable to being on the outside, where dwell the careless, bigoted, blinded masses. The woke paradigm encourages us to look down on those poor benighted souls just as the Pharisee in Luke 18 looked down on the tax collector: “I thank you, Lord, that I am not like other men.”

The unremitting bitterness and mercilessness of cancel culture flows out of this ideology that draws a sharp line between the bad people and the good people. In contrast, Christianity draws a line between the bad people (all of us) and Jesus. Our hope is not in that we have lived up to God’s righteousness, but in that Jesus did so on our behalf, in his life, death, and resurrection. Thus, every Christian has reason to be overflowing with gentleness and grace: the one who has been shown mercy, shows mercy.

Christians understand C.S. Lewis’s warning that “spiritual nature, like bodily nature, will be served; deny it food and it will gobble poison.” Hence, we believe that the true, Christian story of creation, fall, redemption, and restoration in the gospel of Jesus Christ is the most effective and complete way to dislodge the mythos of critical social justice. But for those who believe that no such transcendent story exists, fighting wokeness will be an uphill battle.

Neil Shenvi holds a Ph.D. in theoretical chemistry from U.C.-Berkeley. He was a post doc fellow at Yale and a research chemist at Duke. He has an active Christian apologetics ministry and an apologetics book forthcoming with Crossway. His Twitter is @NeilShenvi.

Pat Sawyer holds a Ph.D. in educational studies and cultural studies from UNC Greensboro. He is on the faculty at UNC Greensboro in the department of communication studies and serves on the editorial board of the peer-reviewed education journal, Philosophy, Theory, and Foundations in Education. He is published in areas that incorporate critical social theory and has scholarship on race that challenges white power and white nationalist recruiting efforts and discourse. His Twitter is @RealPatSawyer.