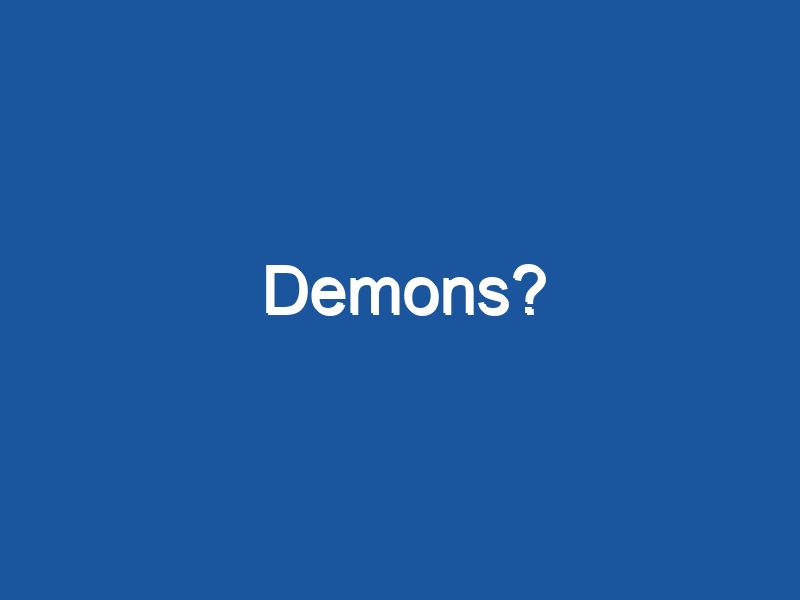 Demons? (Edited)
Did you know there is another realm that you can’t see with your eyes? Its the realm of the Spirit. No matter how smart you are, you cant see what’s going on in the Spirit realm. Lets say someone who actually sees into this realm starts talking about it, people think He’s crazy, because they just cant see it. There are demons and there are angels that you just cant see with your natural eyes. Did you know there are gifts of the Spirit and one of them is discerning of spirits. This gift allows people to see demons and angels.
Many believers in Christ may never see a demon . Its amazing to me that someone can go to a church for years and still have the same demon attached to their life and no one notices. Church is supposed to be a place for people to get free. Some people like their demons and are comfortable with them. A dead church wont even notice some ones demons, but if the Spirit of the Lord is present they will start squealing and coming out of people.
Shouldn’t someone in the church know what’s going on. Especially since one of the signs of being a believer in Christ is that they cast out devils. God wont make anyone be free. You can hide and protect your demon strongholds for 30 years but you will never be free that way. Demons steal kill and destroy: the longer you allow them in your life, the more destruction they will cause. Don’t wait until they destroy your life, kick them to the curb now.
Did you know that every believer deals with demons? The Bible says we must monitor our very thoughts because every thought you have, isn’t just coming from you. The enemy can speak a thought to you, if you believe and obey or act on that thought, then you just got a demonic stronghold in your life. Ill show you in the Bible.
2 Cor 10: 3 3For though we walk in the flesh, we do not war after the flesh: 4(For the weapons of our warfare are not carnal, but mighty through God to the pulling down of strong holds;) 5Casting down imaginations, and every high thing that exalteth itself against the knowledge of God, and bringing into captivity every thought to the obedience of Christ;
Christians cant get possessed because the Spirit of God is within them. They can however yield to demons and listen to them, giving them a stronghold in their soul. The Soul is the mind will and emotions. Demons can also attach to a Christians body as a disease or sickness.
Many Christians have believed lies of the enemy, this allows him access into this part of their life. You might say how do you get free. Ill tell you how, you seek the truth in the word of God and expose the lie. The Bible says if you come to know the truth you will be free from the lie. “Resist the devil dont assist Him. Stop doing what the lies are telling you to do, resist them and be free. They will leave, or you break their stronghold in your life when you stop obeying them.
Submit yourself to God resist the devil and He will flee. Its time to quit protecting demonic strongholds and being comfortable with them. Expose them and come against them in Jesus name and be free. The enemy has to let go of that area of your life, because you aren’t being controlled by his lie anymore. Watch them run. Lets allow the Lord to change us from the inside out by seeking after and embracing the truth.
Show us the truth Lord expose everything in darkness and bring it into the light, set us free Lord in Jesus name. Amen!
Robert Dunsing

I saw Jesus 25 years ago in a vision that lasted 15 minutes. I could never understand what the vision meant for all these years. I told a couple people this vision and they could'nt  understand it either. I just forgot about it until in 2018 the when Lord brought it to my memory and gave me the understanding of this vision. I'll make this long story short.

I saw Him in great detail, I could see His eye pupils and His adams apple. He never looked at me once and I thought He never spoke to me. Until now I know He spoke many things to me. This vision was sealed for this time were in. I believe this final harvest,

I remember the look of great concern on His face as He looked about the face of the earth. He showed me there was two main reasons for His concern. The greater reason is that He paid the price for everyone to be saved and yet people are still choosing to go to hell. His second concerne is where are His people and why arent they doing something about it.

I can share this vision in detail, I saw a man who was left behind and He wasnt able to go with Jesus when He came. The coming of the Lord came quickly and the man was left behind. The Lord doesnt want any one to go to hell not even one person. This vision entails my calling, sharing the gospel with all the world and prepairing believers for the ministry of sharing the good news. I also am teaching people to walk in their gifts and calling.