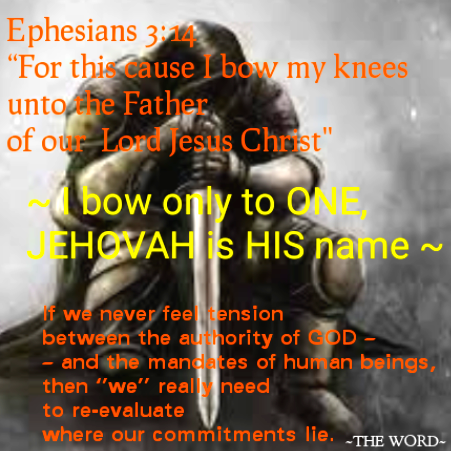 “O magnify the LORD with me, and let us exalt his name together.”
Romans 14:11
“For it is written, As I live, saith the Lord, [every knee] shall bow
to me, and every tongue shall confess to God.”
Deuteronomy 5:9
Thou shalt not bow down thyself unto them, nor serve them:
for I the LORD thy God am a jealous God, visiting the iniquity of
the fathers upon the children unto the third and fourth generation
of them that hate me
Ephesians 3:14
“For this cause I bow my knees unto the Father
of our Lord Jesus Christ,”
Every “arbitrary” law ?
{Arbitrary}:
Tyrannical unrestrained and autocratic in the use of authority.
{Inane}: silly; stupid.
The Bible calls us to obey earthly authorities (Romans 13:1-7).
But, it also holds up examples of godly people who resisted human
orders that violated GOD’S commands (Acts 4:13-22).
Not to get into a lengthy discussion of ALL of the inane & arbitrary
regulations that have been thrust upon every one of us –
– so much so, that we take them all for granted and just accept
them without question. I’m talking the conversion of Rights and
so forth . .
There is no simple formula to relieve this tension; the inherent
conflict requires us to rely on GOD ~ rather than on a list of do’s
and don’ts from those afflicting us (with)
~“Inane” & “arbitrary laws.”

If we never feel tension between the authority of GOD ~
~ and the mandates of human beings, then ‘’we’’ really need to
re-evaluate where our commitments lie.

Apparently, hardly anyone in ‘Babylon’ felt any anxiety about
bowing down to Nebuchadnezzar’s ninety-foot-tall golden image
(Daniel 3:8-12). They just ‘’did it’’ — because if they didn’t,
they feared the fiery furnace (Daniel 3:6).
Was that ‘not’ an Arbitrary, tyrannical rule? Yes it was.
This very same situation takes place everyday, in everyday societal
rules and arbitrary regulations.

This very ‘thing’, that took place in Daniel 3 ~ is GOING to repeat

itself, again. We are ALREADY being “groomed” for it.
Revelation 13:15
“And he had power to give life unto the image of the beast,
that the image of the beast should both speak, and cause that as
many as would not worship the image of the beast should be killed.” Vaccine I.D.’s, QR Codes for travel, the coming social-media
scoring process, etc, etc, are ALL building towards what IS
coming very soon ~ A “double-whammy” — of “digital money”
and the coming “MARK OF THE BEAST”. And it IS all coming
with a whole new set of INANE and ARBITRARY RULES that
“YOU” will be expected to adhere to, or starve, or
be put to death, (or both…)

=What to do=
Q: What should we do if GOD’S law / commandments are against
the law of the government?
A: Obeying GOD’S commandments is our greatest duty in
this life and therefore is the top priority for all humanity.

Shadrack, Meshach, and Abed-Nego would not submit.
They refused to violate the first and second commandments’
prohibitions against idolatry (Exodus 20:3-5).
The refusal of these provincial governors to bow so outraged the
king that he immediately threw the men into a superheated
furnace, (3:19-23).
The brazen act of disloyalty to the Babylonian king,
was a courageous act of loyalty to the LORD.

A similar incident occurred years later, during the reign of Darius.
‘Informers’ exposed Daniel for violating a decree against praying
to any god or ruler except Darius the king (Daniel 6:6-13).
The outcome was similar.
Daniel was thrown to the lions (Daniel 6:16).
On both occasions, GOD delivered HIS faithful followers from death
though not from the threat of death. Their courageous stand
influenced others to fear GOD and also resulted in suppressing
their enemies (Daniel 3:26-29, Daniel 6:21-27).

Is this how Christians today should respond to “laws”
they disagree with?

Some more questions . . .
= Bowing to GOD Alone ~
Q: Is this truly a matter of biblical principle?
A: YES it is.
It is not a preference, taste or style.
We DO IT because it is right.
The principle of it is, is – “GOD” is the CREATOR that produces
everything. “HE” is our operative cause.

“Thou shalt have none other gods before me.”

(paraphrased) —
. . .and cause that as many as would not worship the image of
the beast should be killed.”

A: CHRIST is LORD of those that are living, to righteously rule them;
and of those that are dead, to revive them, and raise them up.
The phrase “living for JESUS” can sound ethereal and idealistic.
We all live for something. Parents may live for their children.
Spouses may live for each other, and business owners may live for
success. We say that we are “living for” something when that is the
motivation for all we do. But ~
living for JESUS means that pleasing HIM is our HIGHEST AIM
(Colossians 1:10). Although we have dozens of lesser motivators,
those filled with the Spirit of CHRIST are motivated primarily by HIS
goals and HIS plans for their lives. When those plans collide with
lesser goals, those who are living for JESUS follow HIS way
and not their own (Proverbs 3:5–6).

“Arbitrary rules”
– that restrict my worship of GOD
– that inhibit my love for GOD
– that run contrary to worshiping GOD Most High
– that speak contradiction to how GOD wants me to live,
and to teach, are no rules that I am mandated by anyone
to follow. I will NOT follow such things.

In Matthew 10:34–39, JESUS stated clearly what it means to follow HIM.
HE said, “Do not suppose that I have come to bring peace to the earth.
I did not come to bring peace, but a sword. HE came to turn
‘a man against his father, a daughter against her mother,
a daughter-in-law against her mother-in-law ~ a man’s enemies will be
the members of his own household.’ Anyone who loves their father
or mother more than me is not worthy of me; anyone who loves their son
or daughter more than me is not worthy of me.
Whoever does not take up their cross and follow me is not worthy of me.
Whoever finds their life will lose it, and whoever loses their life
for my sake will find it.”

In other words, HE came to set a variance between the “world”~
and the “Church”, the true believers and followers of HIM.
This separation begins the process of separating the
“Sheep from the goats”. Believer from non-believer.
Follower from denier. If youyou LOVE HIM, you will keep who’s
commandments? “HIS” Commandments !

JESUS’ bringing a “sword” and turning family members against
each other can seem a little harsh. Especially after words like:
“whosoever believes on HIM shall not perish” (John 3:16).

But JESUS never softened the truth, and the truth is that following HIM
leads to difficult choices. Sometimes turning back may seem very
appealing. When JESUS’ teaching went from the Beatitudes,
(Matthew 5:3–11) to the coming cross, many who had followed
him, simply turned away (John 6:66). *Isn’t it interesting that the verse
number assigned to those who fall away at the cross, is designated
as chapter 6, verse 66? They fell away at the Crucifixion, and more
will fall away, prior to HIS SECOND COMING. .

The night JESUS allowed the authorities to arrest HIM,
even the disciples decided that following JESUS was too difficult.
Every one of them deserted HIM (Matthew 26:56; Mark 14:50).
On that night,
following CHRIST meant possible arrest and execution.
Rather than risk his own life, Peter denied that he even knew JESUS
not once, but three times (Matthew 26:69-75).
Matthew 26:74

“Then began he to curse and to swear, saying, I know not the man.
And immediately the cock crew.”

Following Jesus means striving to be like HIM.
(By example) ~

“My sheep hear my voice, and I know them, and they follow me:”

FREEWILL ~ It truly is up to you.

It’s up to “YOU” to choose HIM.
Likewise, it’s up to ‘’you’’ to follow HIM – and to follow HIS RULES,
HIS GUIDELINES, HIS WAYS, despite however contradictory they may
clash and collide with (any) manemade arbitrary rule, or mandate,
or law (so-called). And there are MANY “inane” laws that collide with
GOD’S righteous plan, many of which are purposefully written that way.

FOLLOW, RELY ON, KEEP YOUR FAITH IN ~ The LORD. 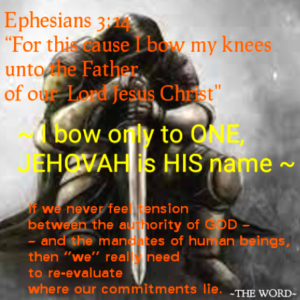