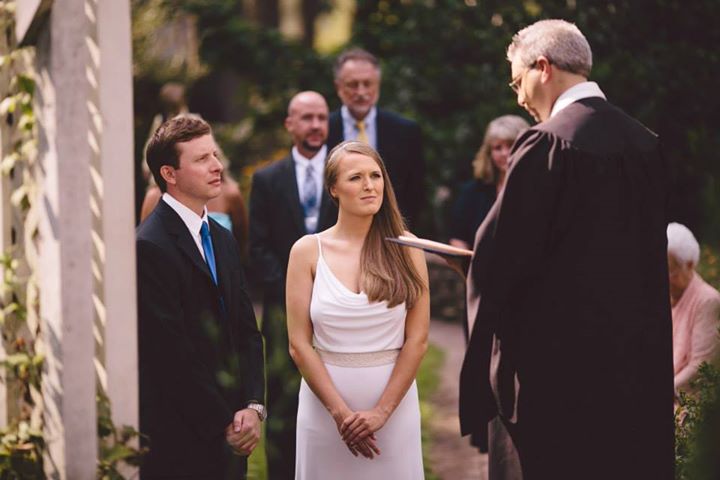 The answer to this question depends totally upon the U.S. State and county where the marriage takes place.  In many States, ordained ministers may conduct (legally binding) marriage ceremonies without the requirement to register with the county. However, marriage laws vary from State to State. It is the minister’s responsibility to know the expectations of the laws in their state. This link (click here) will provide general information about each state’s expectations, as well as contact information for county clerk’s offices.

The early American forefathers that settled the Plymouth Colony in the 1600s (now Plymouth, Massachusetts) were faced with the issue of the first marriage that was to take place on what is now US soil.  Not knowing whether marriage was to be administered by our government or an ordained minister, they searched the scriptures fan an answer. Their conclusion was surprising:

“The first marriage in this place which, according to the laudable custom of the Low Countries, in which they had lived, was thought most requisite to be performed by the magistrate, as being a civil thing, upon which many questions about inheritances do depend, with other things most proper to their cognizance and most consonant to the Scriptures (Ruth iv) and nowhere found in the Gospel to be laid on the ministers as a part of their office.”

The early settlers in America concluded that weddings were nowhere found in the Gospel to be laid on ministers as a part of their office.

What are the implications?

There is no Biblical example of a minister performing a wedding ceremony.  This does not mean that it is wrong for ministers to solemnize marriages, but simply that the Bible does not seem to support it as a religious practice. Therefore, it is American culture that has made the officiating of weddings a religious duty of the clergy.

Marriage was governed in Biblical times as well as today by the established government of the land.

In Biblical times the Law of Moses was in fact the governmental laws of the land of Israel.  God gave Moses the law, for the Jews to obey, in the land of Israel (Deuteronomy 4:5, 14, 5:31, 6:1). Throughout Leviticus, Moses speaks to the children of Israel with clear instructions for living in the land, under the Law.

By way of example, consider this portion of the Law of Moses regarding divorce:

“When a man takes a wife and marries her, if then she finds no favor in his eyes because he has found some indecency in her, and he writes her a certificate of divorce and puts it in her hand and sends her out of his house, and she departs out of his house,  (Deu 24:1)

From verse 1 it is clear that the law had a process for divorce which means that it held the authority of recognizing marriages as valid and legal.

The source of confusion regarding weddings, ministers, and law is probably due to the vast differences between American government and the way Israel “was” governed under Moses’ law.  Nevertheless, it has become an American custom for ordained ministers to officiate weddings -and this is indeed honorable.  However, it is not a matter of burden that the responsibility be laid upon the office of Christian clergy.  For these reasons, we grant the privilege to officiate weddings to all ministers which are recognized by our organization. Yet, it should be noted that it is their responsibility to know the laws in the state/county in which they plan to officiate weddings.

Someone approached me today asking if I would consider conducting a “religious marriage” ceremony for her and the man she is dating, but without filing the paperwork for a civil/legal marriage with the State.

As to your question, the NACM does not state that NACM ministers can only perform weddings that go through the State process for recognizing that wedding/marriage as “legit”. I understand this couple’s concern, as many are talking about this these days. I think the more important question is, for you as a Christian minister and this couple, what could be the consequences of NOT registering according to State laws, in that their marriage may not be recognized and therefore affect some things such as filing taxes “jointly”, and possibly other things. At this time, there really aren’t any ill consequences to complying with State regulations concerning wedding ceremonies, as far as registering with the State where the wedding is performed and the minister registering (to prove they are a bonafide licensed minister with the NACM). This does not set one up for some kind of State control of their wedding or marriage. You might share with that couple that the reason this exists, originally, was to protect couples from being misled by someone claiming to be a legit minister (so the requirement to prove ordination/licensing by a legit organization – usually a Christian denomination, organization that ordains/trains ministers, or church). While, yes, a marriage is God’s doing in bringing a husband and wife together and sanctioning their union, in this world with its corruptions the wedding officiating minister, representing the Church, confirms what God is doing (in the wedding ceremony) as a witness to Christians as well as the world.

As a Christian ordained minister, it will be up to you to weigh carefully, prayerfully, what liabilities this might mean for you if you choose to conduct a wedding in a way that doesn’t comply with your State’s laws. Again, at present, there isn’t any ill consequence for Christian ministers to register with the State, in whatever a State might require, for conducting a wedding. There may, though, be later repercussions for the minister who performs weddings without registering with the State, ignoring the State’s laws for making sure a wedding officiant is properly ordained/licensed to perform a wedding. For me, at this point in time, I have no reason to resist State law, as it actually seems to me to be a good thing in protecting the wedded couple from being misled by those not ordained or licensed Christian ministers. I believe CHRISTIAN ministers should be, as it has been for a few centuries in America, THE only ones who should conduct a wedding – because marriage is God’s (Christianity’s God) institution, not man’s. I personally struggle, too, with those, even Christians, want their Dad or Uncle or family member, who is not an ordained minister, to conduct their wedding; this too, I believe, undermines God’s intention for the minister’s role in helping a couple start into their marriage with good Christian counsel and support – something a relative is likely unprepared to give (instead, let a relative participate in the service along with the Christian minister, as thought best). As this State law weakens and almost anyone can perform a wedding, this only contributes to the breakdown of biblical, Christian services that rightly belong to Christianity and the church/clergy.

It’s much the way things have gone as to “living together” – even as more and more Christians are doing this, too, justifying their “marriage, though not married” as “Well, we believe we are married in God’s eye” and therefore do not need the witness of the Church and a Christian minister. This has contributed greatly to the breakdown of marriage and only helps our enemy, as he has already done, destroy God’s commands regarding marriage to make it a casual thing anyone can “preside” over (a wedding ceremony), including a Buddhist priest, a New Age self-proclaimed “minister”, or a person’s willing relative. Sad.

Well, that’s my personal take on it. As far as the NACM, we do not (though maybe we need to) have a definitive statement as far as complying with the laws of one’s State as to conducting a wedding. I think we just assumed our member ministers would do so. I would just urge you to pray much on this, not only for the couple’s sake, but especially for your own – as to what this means for you as a Christian minister in relation to the possibilities of consequences in relation to your State’s laws. We are, as Christians, as ministers, to comply with “authorities”, as Paul urged, UNLESS the laws command us to do something that is against our Lord’s commands and directives.

I parallel it to ordination, for example. Yes, it is God who calls a Christian into a particular ministerial role – like a pastor, or evangelist, or missionary, etc. (note: the Scriptures never list “wedding officiant” as a particular role, I would imagine simply for the fact that it was reasonably expected that the pastor of a local fellowship would preside over a wedding ceremony, much like the Jews especially would be used to, as their designated priests performed wedding ceremonies in their Jewish religion) – but it is His Church Body, the Body of Christ, Who confirms God’s ordination upon a believer called into ministry, as a way to give witness to that call/ordination of God before all. That’s our view as the NACM, too: we don’t ordain, God our Father does – but as fellow Christian ministers, we confirm that calling by “ordaining” the called-out minister as well – giving testimony in the midst of the believers of God’s call upon that minister’s life. If that makes sense.

Similarly, God leads a man and woman to come together and become one – “marriage”. But the Church confirms this through a ceremony by a Christian minister, ordained/licensed “clergy”, and other present witnesses. This is a good thing! It gives the couple assurance of support by fellow believers, to pray for them, encourage them in their marriage, and be there for them. It also gives assurance of God’s leading in that marriage, as their pastor, shepherd of their souls, commits to support and counsel them in that most important of all human relationships – the family.

As long as the State doesn’t corrupt this helpful confirmation by a licensed clergy person by infusing some kind of immoral directive, I believe this actually helps the couple to take their marriage seriously. I could imagine one temptation later, if the couple finds themselves at odds with each other with relationship problems, they may feel they can walk away from their “marriage” more easily – since it’s not really registered as a marriage. And frankly, this does happen! I’ve witnessed this myself.

Nevertheless, again, as the NACM, we would leave this decision up to you. I don’t think it is a light decision to make. Perhaps having some good pre-marital sessions with the couple (which I think every Christian minister should require, rather than just only being involved to conduct the wedding) this can be discussed in depth with you directing and bringing up the possible challenges/consequences of marrying without State registration (Could the State, in some circumstance down the road, deny any benefit to the couple because there is no State record of their wedding/marriage? And could the IRS, if they filed their taxes “jointly” – which is taken to mean as a married couple – and do not find them registered as married, cause a legal problem with their marriage and usual benefits?)

I would want to know any true, real underlying reasons for not wanting to register their wedding with the State, as the law requires. Maybe there are some motivations that need to be addressed?