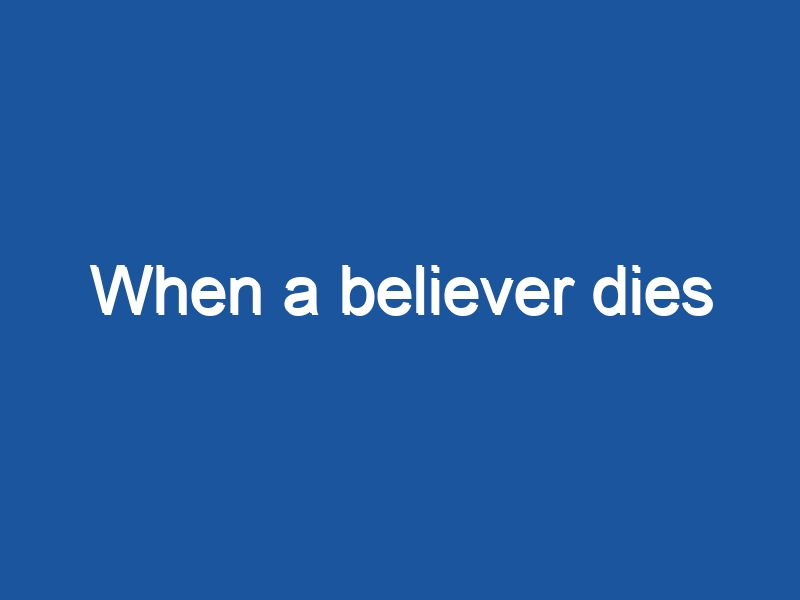 When a believer died in the Old Testament his body went in the grave and his soul and spirit went to the place of paradox, but when Jesus died on the cross was buried and he rose again on the day of his ascension something changed, I want you to read Ephesians chapter 4 verses 8 – 10.

Therefore, he says when He ascended on high He led the captivity captive and gave gifts to them. Now this is sending what does it mean that he also first descended into the lower parts of the earth he also said it is the one who is sent from above all the heavens that he might know all things.

All the Old Testament saints who died believing God before, when Jesus died on the cross after his death he went into paradise, and He retrieved them.

Let’s go back and remember in second Corinthians chapter 12:24, you remember what Paul said about his vision “I know a man in Christ who fourteen years ago was caught up to the third heaven. Whether it was in the body or out of the body I do not know–God knows”. Where’s the third heaven? It’s in the north it’s the pits or God is right alright and I know such a man whether in the body or other body I do not know God knows how he was caught up in the Paradise. Where is paradise into the third heaven how did it get there? When Jesus ascended into Paradise. He took it up to the third heaven, so now where are they when a believer dies his body goes in the grave and his soul (doesn’t go to sleep there’s no such thing as soul sleep), I’m going to tell you something, Weather, you’re a Christian or not a Christian you’re going to be alive somewhere forever and ever! Your soul does not sleep the body returns to dust in the soul goes to paradise which is the third heaven, and your spirit returns to God as his breath.

So, the phrase “absent from the body” found in 2 Corinthians 5:6-8. Paul states that he is confident in his eternal destiny and longs for the day when he can be “absent from the body” and be present with the Lord he loves and serves. To be “absent” from one’s body simply means to die because, at death, the spirit is separated from the body and moves into its eternal abode—either heaven with the Lord or hell, separated from God for eternity.

In the same way, Christians are always confident, knowing that while we are at home in the body we are absent from the presence of God. For we walk by faith, not by sight. We are confident, yes, well pleased rather to be absent from the body and to be present with the Lord. When a born-again believer dies, his soul goes immediately into the presence of the Lord. There, the soul consciously awaits the resurrection of the body. To the church at Philippi Paul wrote from a Roman prison:

“For to me, to live is Christ, and to die is gain. But if I live on in the flesh, this will mean fruit from my labor; yet what I shall choose I cannot tell. For I am hard-pressed between the two, having a desire to depart and be with Christ, which is far better. Nevertheless to remain in the flesh is more needful for you” (Philippians 1:21-24).

There are some who believe in soul sleep, meaning that when a person dies, his body and soul sleep in the grave, awaiting the resurrection. But if this were true, why would Paul not want to live to minister as long as possible, rather than sleep in a grave? And if it were true that the body and soul are never separated, it would be impossible to ever be absent from the body and present with the Lord.

We conclude, then, that believers who die are indeed absent from their physical bodies and present with the Lord in conscious bliss waiting that grand resurrection day!