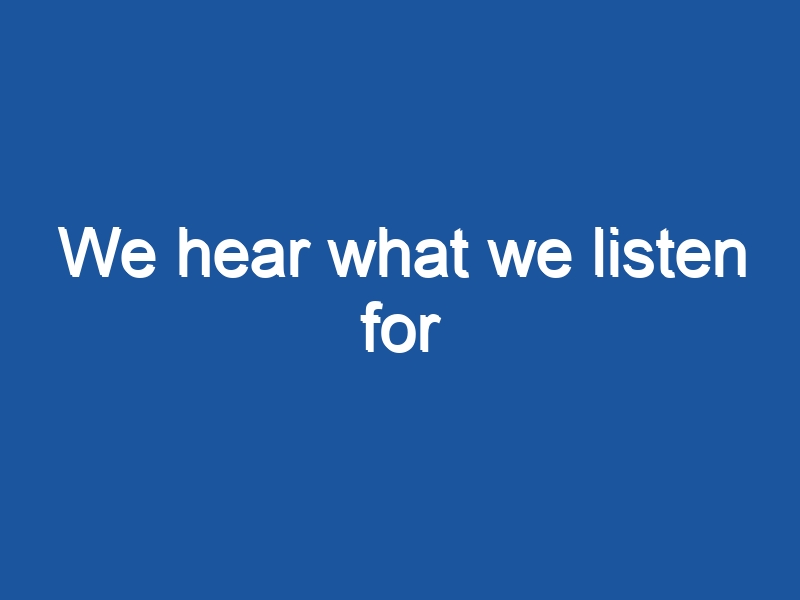 Two people are walking down a street in Detroit, the cars, buses, people are so loud you can barely hear yourself talk. Suddenly, one of them stops and says “Do you hear that? What a lovely sound that cricket is making.”

But her friend stood there listening but could not hear anything but the sound of the city. Puzzled he asked his friend “How can you hear a cricket chirping over all this noise? All I can hear is people and the traffic.”

The woman was a zoologist, and she had trained herself to listen to the sounds of nature. But instead of going into a long discussion she simply reached into her pocket and pulled out a 5o cent piece. She dropped it on the ground. EVERYONE stopped in their tracks and began looking for the fallen coin. She then looked at her friend and said, “We hear what we listen for”.

As a Chaplain, I listen to people talk all the time. Many times the people don’t realize what they are asking me for is not what they need. Sometimes it’s help with financial stuff, sometimes it’s prayer. But most often they are asking for help with something that they don’t know the answers to. If I listen closely to the Holy Spirit, he will tell me what is really in their hearts. (They are angry, someone hurt them, they are scared, lonely, or just need someone to hear them.)

As we listen, we can learn that Holy Spirits voice leading, directing us in the direction. Sometimes, we think we need something, but the Lord says “No that’s not what you need that’s what you want. I have something better for you.”

If we take the time to listen for the small voice of the Holy Spirit, we begin to experience the peace that surpasses all understanding. But first we must learn who He is through his word. By doing so we can learn to speak to him, and hear his voice responding to us. But to do that you must sit still and listen.