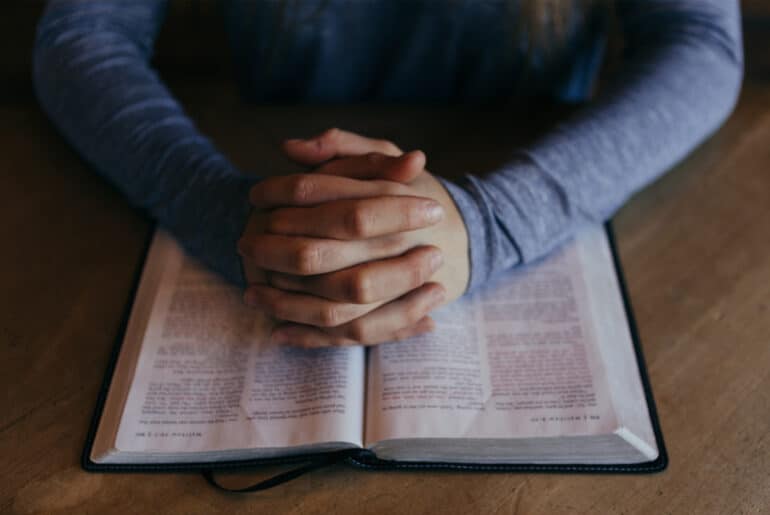 In a recently-published study in the journal Psychology of Religion and Spirituality, researchers found evidence that reflecting on biblical scripture impacted subsequent cardiovascular stress reactivity among Christian college students.

The findings provide new insights into how religious practices can influence psychophysiological processes.

“I have a long-term interest in religion/spirituality and health and, in particular, trying to determine mechanisms that may account for relationships between the two,” said study author Kevin S. Masters, a professor of psychology at the University of Colorado Denver and director of the Cardiovascular Health and Life Meaning Lab.

“Psychophysiological reactivity to stress is an important psychological mechanism linking psychological functioning and health processes and perhaps outcomes. It is impossible to do randomized trials of the effects of what people believe, particularly when it comes to religion (cannot randomize them to belief conditions), but it is possible to do randomized trials of religious practices.”

“This led us to the idea of investigating prayer and reactivity,” Masters explained. “Practical and perhaps ethical considerations led us to focus on one particular religious group (Christians) but we were also very interested in the basic question of whether prayer was beneficial in response to a particularly challenging type of stressor, i.e., one that specifically targets the essentials of one’s faith.”

“In essence, would these Christians, after prayer beneficently for others vs. the other conditions, then respond with defensive reactivity (a type of in-group response) or would they show calming effects of prayer (the ‘love your neighbors’ response) when dealing with an ‘adversary’.”

In the study, 85 Christian undergraduate students — who all reported that their faith was moderately to very important in their daily lives — were randomly assigned to one of three groups.

One group was instructed to reflect on New Testament scriptures that emphasized prosocial values, such as “But I say to you, love your enemies, bless those who curse you, do good to those who hate you, and pray for those who spitefully use you and persecute you” (Matthew 5:44), for about 15 minutes.

The second group was asked to reflect on similar passages, which also emphasized prosocial values but were nonreligious, while the third group was instructed to relax while looking at a series of natural landscapes.

The participants were then subjected to a confrontational one-on-one interview with a research assistant, in which they were asked to respond to questions such as “If God has a preexisting divine plan then how is it that you can ask Him to do something and He can respond to your request?” and “Where was God during natural disasters or the Holocaust?”

The participants wore an automated blood pressure cuff throughout the study, allowing the researchers to measure objective changes in their cardiovascular reactivity.

As expected, Masters and his colleagues observed increases in blood pressure and heart rate during the confrontational interview. However, participants who had reflected on New Testament scripture demonstrated lower cardiovascular reactivity on average compared to the two other groups.

“Among those of the Christian faith, devotional prayer for other people served a physiologically identifiable stress dampening effect when encountering a challenging interpersonal situation. In terms of living out the Christian faith (i.e., love your neighbors and enemies) this suggest that prayer for the welfare of others leads to better treatment of those others and lessens ones own toxic physiological responses to challenge,” Masters told PsyPost.

But the study — like all research — includes some limitations.

“The major caveat is that the study took place among Christians in the laboratory and therefore how well it will generalize to real life conditions, and what parameters may be important in affecting this generalization, is not known,” Masters said. “Perhaps most importantly in this regard, the prayer and challenge occurred very close in time. We do not know if the same effects would be experience if more time passed between the two.”

“Further, we studied only one prayer-challenge incident. We don’t know if individuals who developed a habit of praying in this way would have stronger effects when challenged than when tested among those lacking this habit.”

Masters also told PsyPost that one reviewer seemed to be skeptical that the study had real-world implications, suggesting that Christian students at a secular university were unlikely to have their faith questioned.

“One of the peer reviewers (we are blind to who this individual was) seemed inclined to think that Christians in the US would not – even could not – experience challenges such as this one in real life,” he explained. “But the participants themselves indicated that such an experience was not uncommon and it is our experience that ‘micro-aggressions’ of this type are far from rare in these particular settings.”

“We found it interesting that the reviewer seemed to think that s/he was able to determine the limits and range of experiences of these individuals. To some extent, this reviewer’s objection served, ironically, to actually demonstrate the applicability of the interpersonal stressor used in the study itself,” Masters added.

“Nevertheless, we were agnostic in terms of knowing how these Christians would actually respond but were very interested to find out! We were, to a degree, putting their faith to a practical test with no idea how it would play out.”

The study, “Effects of Devotional Prayer and Secular Meditation on Cardiovascular Response to a Faith Challenge Among Christians“, was authored by Kevin S. Masters, Ralph W. Emerson, IV, and Stephanie A. Hooker.