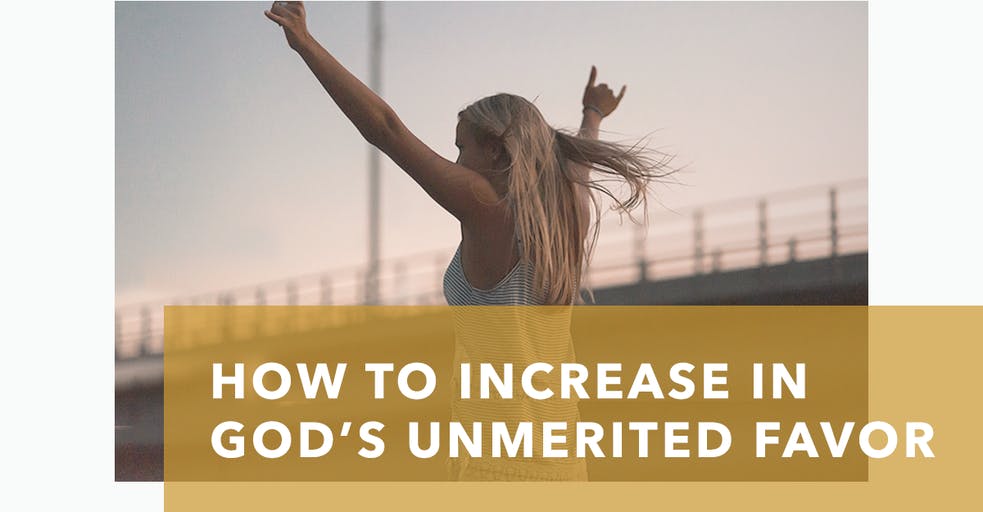 Have you ever made it a habit of asking God for His favor?  I find that many believers have never thought to include this request in their daily prayers.  Yet, we can miss great opportunities simply because we fail to ask (James 4:2-3).  Many years ago, the Lord placed this message on my heart.  So, I thought that I would put it to the test.  The results remain remarkable to this very day.

Below I have placed a number of verses which highlight God’s favor in the lives of His people.  Along with them I have given headers to highlight a meditation for the verses, and a sample prayer that you can pray over your lives.  I challenge you to “Taste and see that the Lord is good” (Psalms 34:8).

God’s favor should be spoken over His people.

(23)  “Tell Aaron and his sons, ‘This is how you will bless the Israelites. Say to them:

(27)  “So whenever they use my name to bless the Israelites, I will bless them.”

Prayer: Lord I pray that you will smile when you look upon me.  Watch over me with the mindfulness of your blessings which show me your kindness.  Grant me peace knowing that I depend on your favor.

King Saul realized his error of not seeking God’s favor!

So I thought, ‘Now, the Philistines will come against me at Gilgal, but I haven’t sought the LORD’S favor.‘ I felt pressured into sacrificing the burnt offering.”  (1Sa 13:12)

Prayer: Father, I will seek your favor all the days of my life.

(11)  But let all who take refuge in you rejoice. Let them sing with joy forever. Protect them, and let those who love your name triumph in you.

(12)  You bless righteous people, O LORD. Like a large shield, you surround them with your favor.

His anger lasts only a moment. His favor lasts a lifetime. Weeping may last for the night, but there is a song of joy in the morning.  (Psa 30:5)

O LORD, by your favor you have made my mountain stand firm. When you hid your face, I was terrified.  (Psa 30:7)

Prayer: Thank you Lord for giving me a lifetime of walking in your favor.

God should be praised for His favor.

Favor is a point of view from God’s perspective.

(9)  Look at our shield, O God. Look with favor on the face of your anointed one.

(10)  One day in your courtyards is better than a thousand anywhere else. I would rather stand in the entrance to my God’s house than live inside wicked people’s homes.

Prayer: Father, look at what you have done for me.  The countless ways you have anointed me to enjoy the presence of your favor.  May you always direct me to welcome others at the entrance of your house.

God’s favor is granted by Him.

(11)  The LORD God is a sun and shield. The LORD grants favor and honor. He does not hold back any blessing from those who live innocently.

(12)  O LORD of Armies, blessed is the person who trusts you.

Prayer: Father, grant me the honor of blamelessness in your sight.  Lead me to the countless blessings set aside for your righteous and chosen people.

because you are the glory of their strength. By your favor you give us victory.  (Psa 89:17)

Prayer: Father I remind you that my every victory is dependent on your favor.

Remember me, O LORD, when you show favor to your people. Come to help me with your salvation  (Psa 106:4)

God’s favor should be pursued as the passion and volition of our hearts.

(57)  You are my inheritance, O LORD. I promised to hold on to your words.

(58)  With all my heart I want to win your favor. Be kind to me as you promised.

(59)  I have thought about my life, and I have directed my feet back to your written instructions.

God shows us His favor when we show others mercy in truth.

(3)  Do not let mercy and truth leave you. Fasten them around your neck. Write them on the tablet of your heart.

(4)  Then you will find favor and much success in the sight of God and humanity.

(5)  Trust the LORD with all your heart, and do not rely on your own understanding.

(6)  In all your ways acknowledge him, and he will make your paths smooth.

(34)  Blessed is the person who listens to me (wisdom), watches at my door day after day, and waits by my doorposts.

(35)  Whoever finds me (wisdom) finds life and obtains favor from the LORD.

Prayer: Lord, give me the wisdom to walk in your favor.

(2)  A good person obtains favor from the LORD, but the LORD condemns everyone who schemes.

(3)  A person cannot stand firm on a foundation of wickedness, and the roots of righteous people cannot be moved.

Prayer: Father, surround me with your favor as you visit the grass with dew every morning.

Favor is something developed in our lives.

The boy Samuel continued to grow and gained the favor of the LORD and the people.  (1Sa 2:26)

The child grew and became strong. He was filled with wisdom, and God’s favor was with him.  (Luk 2:40)

Prayer: Father, as a child I ask you to develop your favor in my life so that I may grow in your strength and wisdom.

God’s favor enjoys favor from others.

Jesus grew in wisdom and maturity. He gained favor from God and people.  (Luk 2:52)

Prayer: Lord, give me favor in the communities where you have sent me to dwell.

God’s favor is Good News.  It is the essence of the Gospel.

(18)  “The Spirit of the Lord is with me. He has anointed me to tell the Good News to the poor. He has sent me to announce forgiveness to the prisoners of sin and the restoring of sight to the blind, to forgive those who have been shattered by sin,

There is a presence of God’s favor.

Stephen was a man filled with God’s favor and power. He did amazing things and performed miracles.  (Act 6:8)

Prayer: Father, I ask you to mark me with your favor so that others are compelled by your goodness.

God’s favor is a position.

Through Christ we can approach God and stand in his favor. So we brag because of our confidence that we will receive glory from God.  (Rom 5:2)

Prayer: Thank you God for the favor to stand in your presence without fear.

Certainly, sin shouldn’t have power over you because you’re not controlled by laws, but by God’s favor.  (Rom 6:14)

Prayer: Father, let my heart be guided by and toward your favor.

God’s favor is the quintessential of His grace.

Those of you who try to earn God’s approval by obeying his laws have been cut off from Christ. You have fallen out of God’s favor.  (Gal 5:4)

Prayer:  Father remember me and all of those in the household under my care.  I remind you that our every need is supplied by you alone.

God’s favor is measured and granted to us by Christ.

God’s favor has been given to each of us. It was measured out to us by Christ who gave it.  (Eph 4:7)

His favor is with everyone who has an undying love for our Lord Jesus Christ.  (Eph 6:24)

My challenge to you is that you join me in the daily meditations, prayers of persistence, and pursuit of His favor over your lives and ministries.  Do this intentionally and systematically every day for at least a year.  Keep a journal of His favor shown to you.  Do this and see if your life overcome by His goodness.  I assure you by my own testimony that it will! 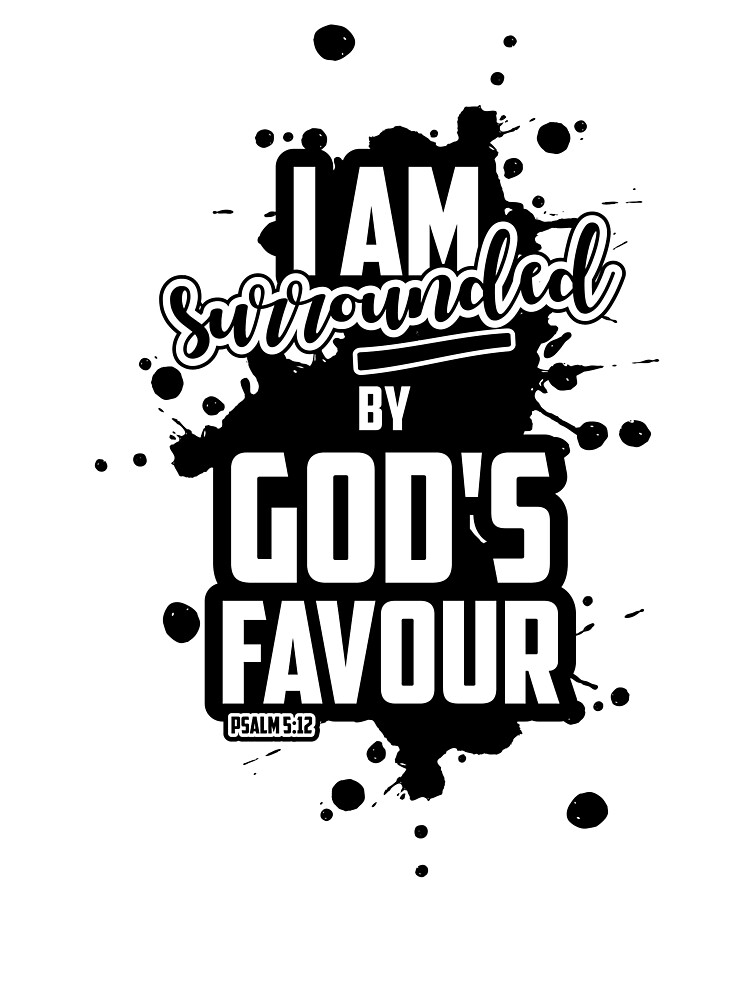