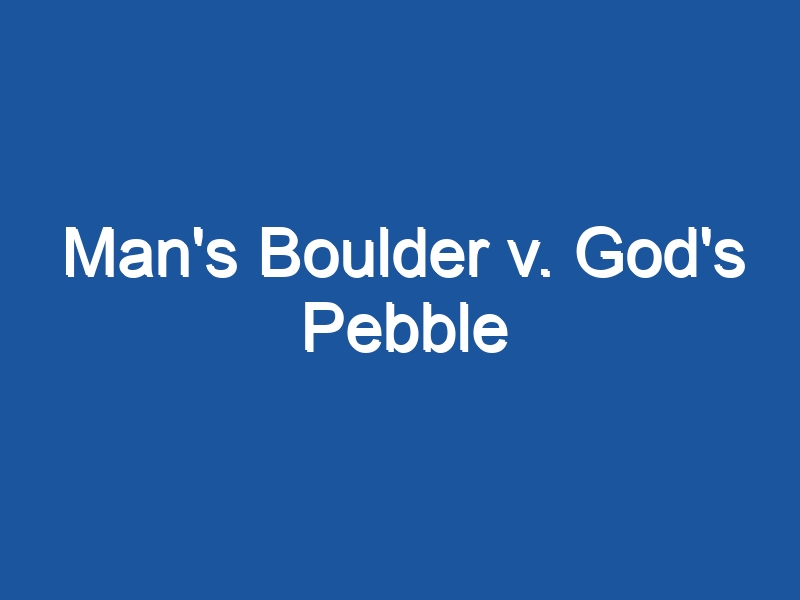 So we were having a healthy debate in the theology class. It was about the competing theories of a possible Gap between Genesis 1:1 and Genesis 1:2. Many books, journal articles, and other academic perspectives exist on the matter. The question was: what do you think happened?

Given the seminary setting, that was like throwing a piece of fresh bone to a bunch of famished dogs!! Bright, and not-so-bright deas flowed. My answer was simple.

God made a pre-Adamite specie – most ptobably human. At the first experience of pain and suffering, he expected God’s automatic and unmitigated intervention. God delayed longer than the man could endure.

Out of frustration and deep sense of disappointment, the man, MADA, lifted the largest BOULDER he could carry. Up the peak of the tallest mountain he climbed. Then bellowing with all the air he could muster, he hauled the BOULDER heaven-ward, yelling, ” I Hate You.”

In the absence of gravity in those days, his boulder huttled unhindered towards the heavens. The BOULDER is still on its way to God ever since.

Alerted, God’s deepest LOVE was activated. Godrenaline surged through HIS veins as God bent low for the smallest PEBBLE he could find on his pristine royal carpet. Gently, God tossed it towards MADA (that’s the man’s name) down the lowest planets, whispering, “I LOVE YOU – ALWAYS.”

Alas, God’s Pebble was larger than gazillions of galaxies fused together. It hurtled through the macroscosmic sytem, amplified by the whisper of His love. The existing rder turned into chaos as God’s pebble splintered and smashed the intergalactic system  – “Tohu wa-bohu” resulted.

MADA and everything else in the heavens and the physical pluriverse were enmeshed and engulfed in the spoken love of God. It could have been worse. And so, the earh was without form, and void. Darkness covered the face of the deep. The duration was unknown.

Lesson: God’s pebble is always larger than man’s largest boulders. And though His love may be but a whisper, it is much more impactful than man’s hateful roars. Moreover, the common denominator between what was made, any gaps, and what was remade, is GOD. He is always in the mix – the Beginning, and the End. In the darkness, He is the Light. In Death, He is the Life and Resurrection. His love transforms all things.

I became born again and water baptised in 1986. Thereafter, upon being filled with the Holy Spirit, I became fully active in my dad's church, the Assemblies of God Church. I variously worked in lay capacity as youth minister, worship leader, evangelist, and pastor's assistant. I proceeded to Bible College in Abia State Nigeria from 1989 to 1991. During those years, I was an auxiliary English Teacher there, as well as the Secretary of the student union, and designated church planter and missionary to Otukpa and Otukpo areas of Benue State.Since graduating in 1991, I ministered as an evangelist across Nigeria, Togo, Ghana, Cote D'Ivoire, and the U.S. Within ministry, I wrote and produced some popular Christian albums in Ghana, and published two books on Christian motivation. Following relocating to the U.S. in 2005 and naturalizing in 2013, I have earned a Bachelor of Science in Legal Studies, a Juris Doctor Executive in law, the Master of Divinity, with specialization in Christian Apologetics, and currently working on my doctoral dissertation for the PhD in public/foreign policy at Helms School of Government, Liberty University, Lynchburg, VA.I plan to return to full time christian ministry upon successfully defending my dissertation. In this new phase, I am interested in guest speaking opportunities, teaching in Christian collegeges / universities, preaching, and consultancy in public policy, foreign policy, and international outer space space law matters. I also have research interests in astrotheology - to provide biblical imperative for, and inspire Christian interests in the evolving science, technology, and commerce of outer space, celestial bodies, and outer space natural resources.