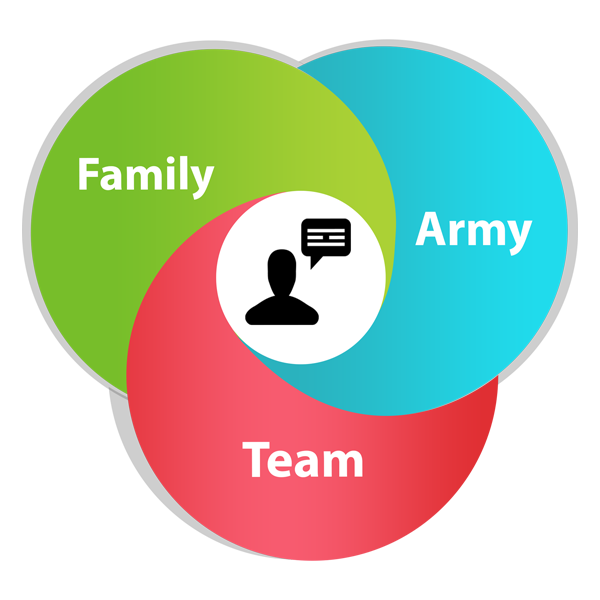 The Need for Affiliation is a term that is defined simply as it is labeled, it is the need by people to be associated with something other than themselves.  This need is deep in most humans and the choice for affiliation has the potential to build or ruin a person’s character.

(33)  Do not be deceived; evil companionships corrupt good habits.

From the very beginning it seems that God instilled a longing for fellowship within humans. Just after making Adam “God said, It is not good that the man should be alone. I will make a helper suitable for him” (Gen 2:18 MKJV).  Since this time humans have reproduced into families, tribes, clubs, social groups, races of people, and nations.  The list of human affiliations seems almost unlimited.  Obviously such groups can be of good or evil intent.  Families, churches, and philanthropic organizations are relatively seen as good affiliations, and hate groups, terrorist militias, etc. as bad.

So how does all of this relate to leadership?

Good question, I am glad you asked.  People in society “generally” have a few things in common:

* They have some sort of family

* They have some sort of religion

* They have some sort of education

* They have participated in some sort of sports

* They belong to some sort of country that has a military

* They have some sort of opinion about all of the above

All of the above are affiliations that serve as great points of reference when trying to unite people around a common goal, objective, or vision.   When leaders appeal to their audience’s experiences in areas like previously listed, there seems to be a greater possibility of gaining agreement and understanding.

From an organizational standpoint, goals are often approached in one of three metaphorical categories:

Usually leadership will call people to action using one of these categories.  Ministers who are motivating people in churches usually address one another as a family.  Motivating people in school often is done by referring to a team.  Motivating people at work is often referred to as a sports team, or in competitive environments an army analogy is used.  Using these structures encourages an environment of understanding, cooperativeness, and helps people to see where they fit into the perspective of the tasks at hand.

As we can see, Jesus preferred the “family” analogy:

(50)  For whoever shall do the will of My Father in Heaven, the same is My brother and sister and mother.