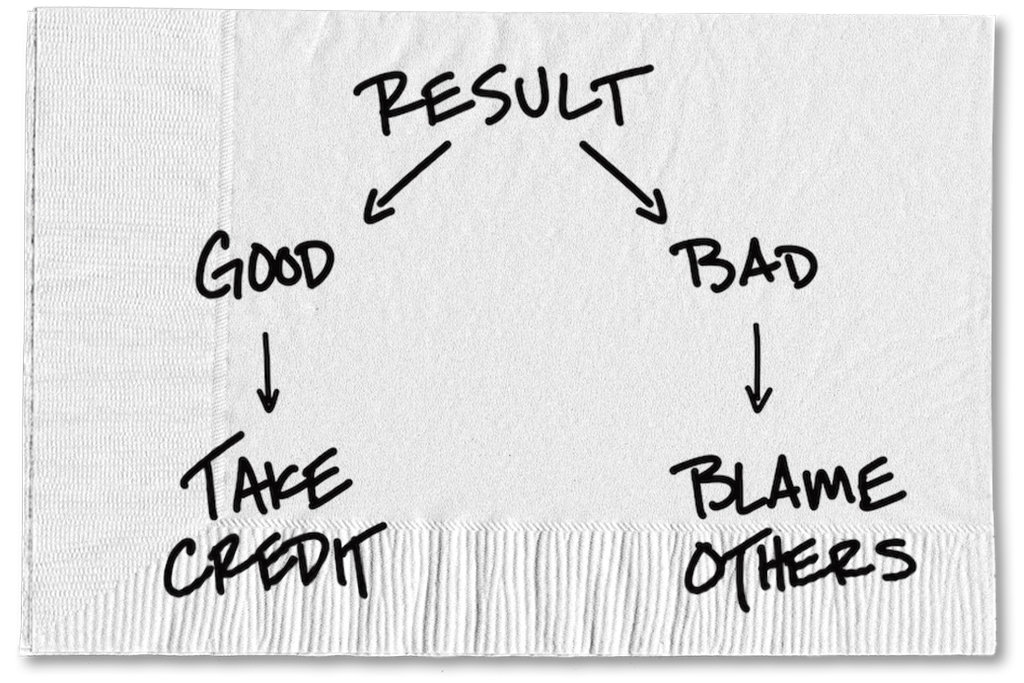 Self-serving bias is the tendency to take the credit for accomplishments and to shift the blame for failures.  I am sure all of us have seen this behavior take place in the world around us.  It probably happens most often in the way parents see their own contributions to the lives of their children.  When parents are at their child’s college graduation it is easy for them to think, “we must have done something right as parents”.  However, when parents are at their child’s graduation from rehab or release from jail, they usually do not reach the same conclusions.

Like the old saying goes, “success needs no explanation and failure has none that works”.

In other words, when our children grow up accomplished we think that we somehow contributed to their levelheadedness.  Yet if they grow up addicted to drugs and anything else that is shameful we have a tendency to say, “I just don’t know what is wrong with them”.

The Cost of Accepting the Praise

Let us not get bogged down in the details of the previous example. If we do we will have forgotten that this is not a lecture in child raising, but rather a discussion of the self-serving bias.  We are all guilty of this bias in one way or another.  It is easy to take the credit when things are good.  But if we are to be logically consistent, we must also accept the blame when things go bad. The only other alternative is to accept neither the credit or the blame, but this position is not without its problems.

It seems best to accept neither the credit nor the blame in terms of people’s lives.  Often people say things like, “the counselor really saved my life”.  If the counselor agrees, then they are also to blame next time the counseled fails. Therefore, it is best for people to accept responsibility for their own success and failures (including our children).  This will prevent many instances of the self-serving bias.

The results of falling into this biased trap are self deception and lack of respect from others.  People will resent others who take all the credit for work to which they contributed.  It is untruthful and unfair to steal the glory.

The Value in Accepting the Responsibility

It is easy to ignore responsibility when one is only an intermediate link in a chain of action.  ~Stanley Milgram

Blame shifting is a terrible from of leadership. “Nobody ever did, or ever will, escape the consequences of his choices” (Alfred A. Montapert).  The apostle Paul says:

2Co 5:10 MKJV
(10)  For we must all appear before the judgment seat of Christ, so that each one may receive the things done through the body, according to that which he has done, whether good or bad.

Since responsibility cannot be escaped, it makes perfect sense to start accepting it now!  Doing so will transform leadership into strong pillars of their organizations, and people will desire to follow.

Take your life in your own hands, and what happens?  A terrible thing: no one to blame.  ~Erica Jong

1) How does the self-serving bias prevent us from objective evaluations of circumstances?

2) How could a leader’s ability to influence others be hindered by this bias?

3) How can leaders position themselves to accept responsibility?

4) How can leaders not take credit for other people’s personal success?