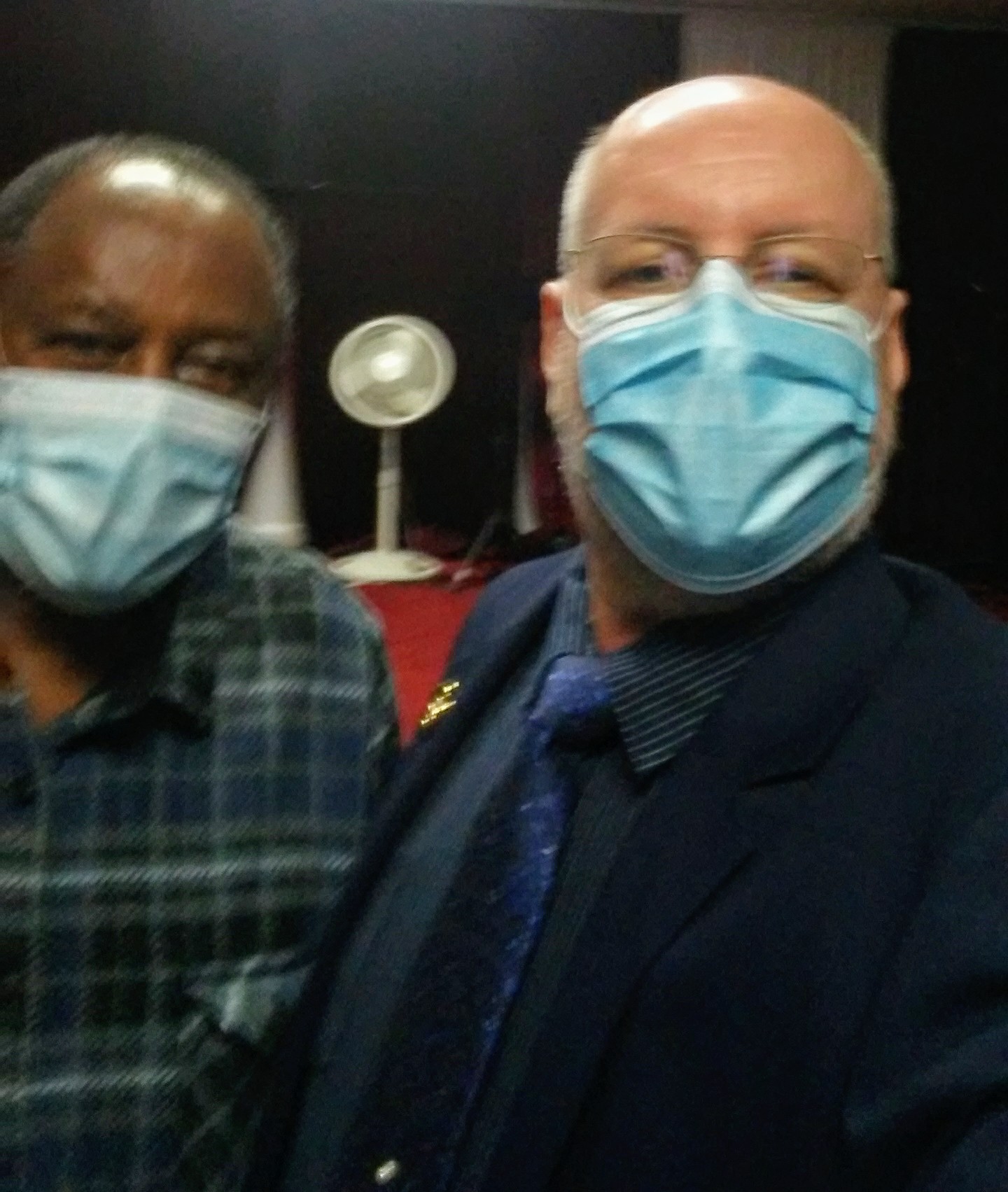 What a great way to start the New Year, as I had the privilege to confirm the ordination of NACM member minister, Rev. Geoffrey Kinyua!

Geoffrey had connected with me through the NACM Christian Chaplaincy Course, expressing his desire to have the laying-0n-of-hands ordination confirmation to complete his NACM online ordination.  Geoffrey is originally from Kenya, Africa, and is involved as a Children’s Minister, Men’s Ministry leader and choir in a local Kenyan church near Seattle, Washington.  So I had the joy of meeting and praying with Geoffrey today, as he seeks the Lord’s leading into new vistas of ministry.

Rev Geoffrey has been in ministries of various kinds for the last 25 years, in Kenya and here in the States (Washington State in particular) and he and his wife and family and friends are involved in this Kenyan local church, Grace Covenant Church in Federal Way, Washington.  I was so surprised to find they hold their gatherings in a commercial building just a couple blocks from my and my wife’s home; and I go to the eye doctor in an office in the same building on the floor just above where they meet!  I’m looking forward to, once the pandemic passes and church gatherings are safe again, attending one of their Sunday gatherings sometime soon, I hope, this year.  I was blessed, too, to learn from Geoffrey that there are several Kenyan churches in the greater Seattle area…and growing!

It was an honor and blessing to meet Rev Geoffrey Kinyua and be part of confirming his call to ministry and ordination by the NACM!  Please pray for our Brother in Christ and God’s clear leading and equipping as he ventures further into all our Lord has for him.

Born 1952 in Pittsburgh, PA; Born AGAIN in 1972 at Kent State University, OH.Education: Westminster College PA ( BA in Bible & English, 1974);Â Asbury Theological Seminary KY (MDiv in Pastoral/Cross-Cultural Missionary, 1986)Ministries: New Wilmington UMC, PA (youth/ass't pastor: 1972-4);Â Bowersville UMC, OH (ass't pastor: 1975-6);Â Brookville United Brethern (Adult Teacher: 1976);Â Life Anew Ministries, OH (urban residential recovery ministry: ass't pastor/street ministries/nursing home ministry/jail ministry 1975-1981); Dayton Christian Schools, OH (Bible/English teacher: 1976-1981);Â Short Term Mission trips in Nome, AK (Inuit (Eskimo) outreach: 1975 - 1980);Â Nicholasville C&MA, KY (ass't pastor; young adults; church plant: 1982-86); Seattle Intertribal Alliance Church (C&MA), WA (Native American church plant: 1988-2001);Â Hands of Creation Native Artists Co-op, Seattle, WA (director - cross-cultural outreach: 1994-2002);Â Immigration Detention Center, WA (Bible study outreach: 1994-1995);Â Seattle Indian Health Board (Thunderbird Inpatient Treatment Ctr), WA (chemical dependency recovery teacher; vocational counselor: 1999-2013);Â Eagle Wings Native American Ministries, WA (founding director: abuse/chemical dependency recovery: 2003-present); National Association of Christian Ministers, Online Ministerial Association (Vice President/Executive Elder: 2010 to present).Ministry focuses: Bible Teacher; Pastoral; Counseling (chemical dependency & abuse recovery); Educator (Christian living; ministry training); Administrator; Cross-cultural Missionary (Native Americans/Indigenous People).Testimony:Â Though raised in a "nominal" Christian home, I did not come to Christ until my first year at college, at Kent State Univ. in 1972, amidst Vietnam War protests and riots on that campus.Â Inner emptiness drove me to seek God, and I came to Christ in my university dormitory room on my knees after reading the Gospel of Matthew for the first time.Â There Christ made Himself and His love clearly known to my heart.Â Immediately I lost interest in architectural studies and transferred to a Christian college, majoring in Bible and English (writing).Â I was fortunate to have a wonderful Methodist minister to mentor me in those early growth years, and soon sensed the Lord's leading to pursue more biblical training through seminary.Â After 2 disappointing experiences at 2 seminaries, I got involved in an inner city, live-in street ministry that helped young people come to Christ out of drug addictions.Â I also became a secondary Christian school teacher for a few years, did 5 short term missions in outreach ministry to Eskimos in Alaska, got married and had my first and only son.Later I became convinced I needed to complete my seminary training, finding Asbury Theological Seminary in KY: no disappointments this time.Â The training for pastoral and cross-cultural ministries was excellent, as well as being a tremendous time for my own spiritual formation.Â I met Christian & Missionary Alliance people there and felt led to join them, preparing to plant a church for Native People, I hoped, in Alaska.Â However, circumstances placed me in Seattle, WA, instead, and with a ministry partner we planted an urban Native church (1988).Â This challenging work continued for 16 years.Â Over those years, the Lord showed us that there was a debilitating, unresolved Native problem that was not being addressed: the widespread experience of Native People with past abuse related to having the highest alcoholism rater of all people in the USA. .Â As a result, by God's grace I, and a couple Native Christians from our former Seattle Intertribal Alliance church, started a new ministry: Eagle Wings Native American Ministries (2003).Â Though officially "retired", my wife (recovering from 30 years of domestic violence and abuse - father, former husband) and I continue to minister to area Native People in recovery from past abuse and chemical dependency.In 2010 I came across the NACM seeking Christian ordination.Â Later that year I accepted the invitation to be an Executive Elder and Vice President.Â I greatly enjoy ministering to fellow ministers and receiving encouraging ministry from them!